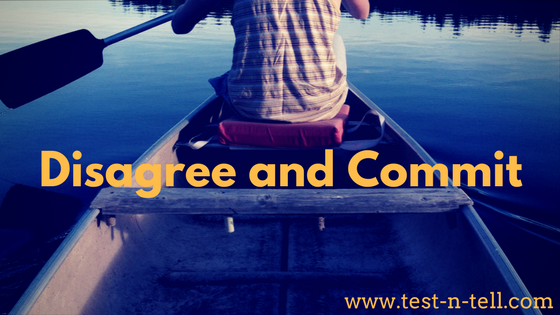 A consensus is not the only way to successfully build products. A compromise is even worse. Sometimes, you need to "disagree and commit."

Amazon popularized the "disagree and commit" concept. Here's how Jeff Bezos describes it in his letter to Amazon shareholders:

Third, use the phrase “disagree and commit.” This phrase will save a lot of time. If you have conviction on a particular direction even though there’s no consensus, it’s helpful to say, “Look, I know we disagree on this but will you gamble with me on it? Disagree and commit?” By the time you’re at this point, no one can know the answer for sure, and you’ll probably get a quick yes.


This isn’t one way. If you’re the boss, you should do this too. I disagree and commit all the time. We recently greenlit a particular Amazon Studios original. I told the team my view: debatable whether it would be interesting enough, complicated to produce, the business terms aren’t that good, and we have lots of other opportunities. They had a completely different opinion and wanted to go ahead. I wrote back right away with “I disagree and commit and hope it becomes the most watched thing we’ve ever made.” Consider how much slower this decision cycle would have been if the team had actually had to convince me rather than simply get my commitment.

Why should you use "disagree and commit"?

What do you need to use "disagree and commit"?

What if you don't "disagree and commit"?

You might disagree with this approach but what stops you from committing to it, even if briefly, to test and tell if it works for you?