When you don't need a diverse team 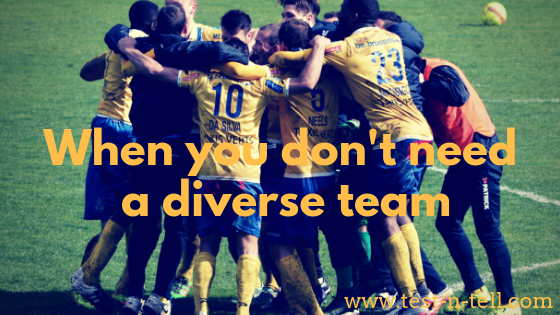 Your chances to innovate, create something new or solve a problem with multiple unknowns are higher when you have a diverse team. Such a team, that consist of individuals with various backgrounds, interests and cultures, given the right environment, will produce better ideas and solutions. But what if you don't need to innovate? What if you need to execute effectively?


Jonathan Haidt, in his brilliant book "The Righteous Mind: Why Good People are Divided by Politics and Religion", writes


Increase similarity, not diversity. To make a human hive, you want to make everyone feel like a family. So don’t call attention to racial and ethnic differences; make them less relevant by ramping up similarity and celebrating the group’s shared values and common identity. A great deal of research in social psychology shows that people are warmer and more trusting toward people who look like them, dress like them, talk like them, or even just share their first name or birthday.

Why would we want to make our teams more like hives? For one, because a hive is ultra-effective. It could achieve much more, much quicker than a pack of diverse individuals. To quote Jonathan Haidt again


[hive-like-groups] generate more social capital—the bonds of trust that help employees get more work done at a lower cost than employees at other firms. Hivish employees work harder, have more fun, and are less likely to quit or to sue the company.

In certain circumstances, a hive-like, homogeneous group might be more preferable to a diverse one. Let's see why a homogeneous team might be better for certain tasks and when you might need one.

Yup, as simple as that. We might not enjoy that fact, but study after study finds that people who are similar ending up liking each other more. Getting along is important for the team's performance. Hence homogeneous teams have an upfront advantage.

When we share beliefs, backgrounds and interests we cooperate better. Take a sports team, an army or an organized religion. Such teams are organized and efficient because their members are bound by shared goals and practices. Trust is much easier to establish in homogeneous teams.

When a homogeneous team might be more preferable to diverse

When you have a project that is strictly defined. Requirements are set in stone and will not change. Your main focus is precise and timely execution. In such conditions homogeneous team might be better suited than a diverse one.

In an environment when you have an autocratic leader who micromanages everything. And a group of contributors whos success depends on the leader's decisions. Then a homogeneous team might perform better as it would galvanise around the leader.

Probably a combination of the above. When you're in a state of emergency. When speed is the priority. And when there is no time for discussions - a homogeneous team will get a job done faster than a diverse one. Less time will be spent on communication and accommodation of individual differences.

Creativity is probably the most important factor in product success nowadays. To come up with novel ideas and ways of working you need a diverse team of professionals. But in time of crisis, or when time and hierarchy become dominant, homogeneous teams tend to do a better job.