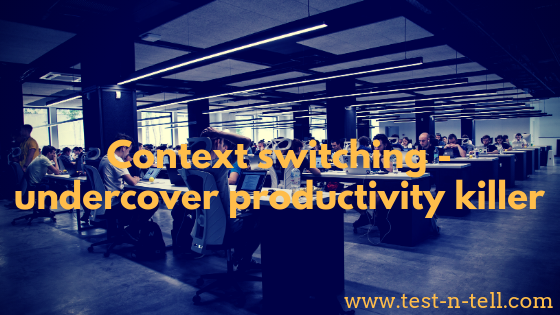 What hurts your productivity the most? Below I'd argue it's context switching.

PMs are asked to do a lot of different things. Interview customers, write reports, discuss with developers, analyse competitors, present to stakeholders and many others. Often, we asked to do many of those things at the same time. Sometimes we try. And we fail.

We fail to recognise that frequent context switching (going from one task to another and then to third, fourth...) is killing our productivity.

Our brains need time to switch between tasks. Just like your PlayStation, to play a new game you first need to close the current one (or eject a cd and put in another one). If you'd be switching games too often - you'd spend more time on switching than on playing.

Instead, we could be much more productive in shorts sprints. Focus on one task, make progress, achieve an outcome. Take a break. Do something else.

The recipe sounds easy, the cooking not so much.

Why context switching is so common?

When everyone works in the same space - distractions are unavoidable. Anyone can come and ask a question. Or you can't help but overhear another conversation. There is constant movement in an office that our eyes wired to notice.

Messengers rule the world. It became too easy to distract someone with a message. Not only you can ask quickly - you also expect an instant response.

The modern world changes too quickly

Yes, we can't keep up. While you were working on your product, competitors already released dozens of clones. While you were talking to one customer - ten others left you as they couldn't get hold of you. In the morning they talk about successful IPO - in the evening about bankruptcy.

What can you do?

Note down how many times a day you switched contexts. Measure the time it took you to do that vs the productive work time.

Introduce changes one by one

Try "library rules" in your office. Or "do not disturb" mode in messengers. Stop reading the news every day. Turn off notifications on your phone. Try focus software. Use one monitor. Wear a witty antisocial t-shirt.

Repeat until no further improvements possible. Or until all the work is done and you can retire to a tropical island.

Need more ideas on how to reduce distractions at work and in personal life? Check out the new book by Nir Eyal "Indistractable".