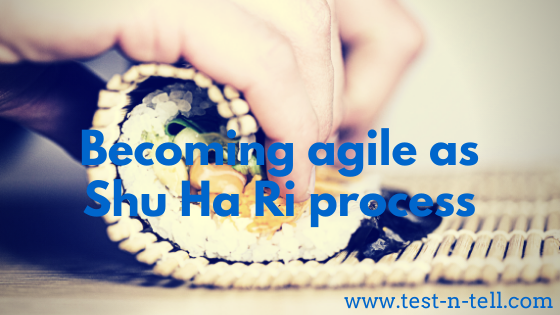 What does an ancient Japanese philosophy have to do with Agile product development process? Why does one of the most successful car manufacturers in the world use it? What's wrong with most Agile "transformations"?

I've been reading "The Toyota way" and came across the concept of Shu Ha Ri. According to the book, this learning method is used by Toyota for many years and it's contributed majorly to their success.

What is Shu Ha Ri?

Shuhari (Kanji: 守破離 Hiragana: しゅはり) is a Japanese martial art concept which describes the stages of learning to mastery.


Aikido master Endō Seishirō shihan stated:"It is known that, when we learn or train in something, we pass through the stages of shu, ha, and ri. These stages are explained as follows. In shu, we repeat the forms and discipline ourselves so that our bodies absorb the forms that our forebears created. We remain faithful to these forms with no deviation. Next, in the stage of ha, once we have disciplined ourselves to acquire the forms and movements, we make innovations. In this process the forms may be broken and discarded. Finally, in ri, we completely depart from the forms, open the door to creative technique, and arrive in a place where we act in accordance with what our heart/mind desires, unhindered while not overstepping laws."

Toyota uses Shu Ha Ri as the main learning framework. They used to assign a sensei (a master) to every employee and invest heavily in developing their staff.

Most fresh employees start from the Shu stage. They will look and repeat after the sensei until they master the mechanical side of their tasks. At the Shu stage, an apprentice could not deviate from instructions provided by the sensei. They do not necessarily have to understand the why's behind the instructions. That comes later.

When an apprentice mastered repeatable tasks, they can move to Ha stage. There they can bring some creativity and innovation into their work. They can try deviating from instructions a bit in attempts to find a better way to achieve their goals.

Finally, they arrive (or not) at the Ri stage where they can potentially re-write rules and create something completely new and better. It's a mastery stage when unbounded by rules, one becomes a sensei.

So what does it have to do with Agile?

Well, being through multiple Agile "transformations" and implementations, it's quite obvious that most companies still are at the Shu stage of learning to be agile. We're so focused on following the book, on doing what coaches tell us to do even if we don't understand underlying reasons.

Some folks try to jump right into Ha phase and "adapt" Agile for their needs. Most of those attempts fail, most likely because their teams didn't go through the Shu phase and didn't learn the form, didn't develop a discipline. Such a gap in knowledge might lead to burnout and overall disappointment in Agile. A lot of companies will not attempt another Agile adoption.