Great companies defined by the crisis 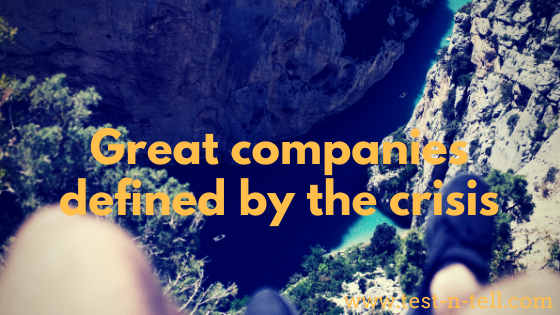 Any crisis produces victims and survivors. The difference between the two at least partly depends on their decisions and actions. Same story with businesses.


Lately, I've listened to two impressive interviews with Airbnb CEO Brian Chesky and Uber CEO Dara Khosrowshahi. Both Airbnb and Uber have been hit hard by the latest crisis. The demand for their services dropped significantly and abruptly. The pressure on both businesses continues to mount from all sides - customers, partners, employees, investors, governments. Neither Airbnb nor Uber have pockets deep enough to weather the storm, they have to make decisions and act now to survive.

The saying goes: true leaders emerge in the times of crisis rather than peace times. Perhaps in a few years, students around the world will be studying the decision-making process of Brian Chesky and Dara Khosrowshahi that helped them save their companies. Or maybe we'll be talking about mistakes they made that led to their downfall.

However, judging by how both leaders speak I bet their companies are going to be fine. They would most definitely change and emerge much different than before, but they'll survive and soon after will thrive. Why? Because their leaders talk the infinite game. Both leaders use their companies vision, the why's, the basic principles to guide their decision making. They seem to have stonewall beliefs about what makes their companies different to everyone else, what is their unique value. That, quite possibly, is the superpower to survive an apocalypse.

Particularly insightful how both Airbnb and Uber make decisions with today's crazy level of uncertainty. The situation changes incredibly fast and no one can predict the future. Unlike Apple or Google or Facebook they cannot just wait it out, they need to act now. I've been impressed by the humility and determination of Brian Chesky and Dara Khosrowshahi. They acknowledge they'll make mistakes, those are unavoidable. They make tough calls and get criticised for that. Nonetheless, they keep going, letting their vision guide them. Guess that's the perfect definition of the level 5 leader.

At the end of the interview, Brian Chesky quotes another brilliant leader Andrew S. Grove:

Success inevitably brings problems: focus blurring, overconfidence, defensiveness...
A crisis forces us to get back to basics, to the core. We have to focus on our main "why", be humble when things won't work and embrace the self-reinvention.