Informed debate - a skill in danger of extinction 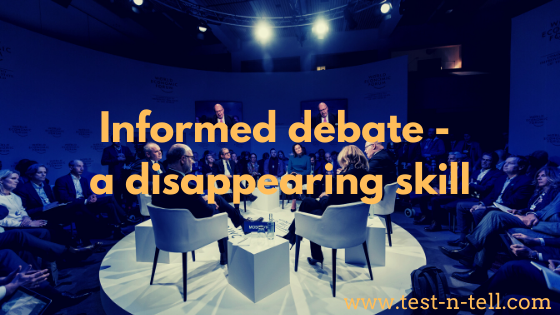 A good product management process has stolen a lot from the scientific method. But there is at least one other skill a good product team would want to adopt from science - an informed debate.

Debate is a process that involves formal discussion on a particular topic. In a debate, opposing arguments are put forward to argue for opposing viewpoints. Logical consistency, factual accuracy and some degree of emotional appeal to the audience are elements in debating, where one side often prevails over the other party by presenting a superior "context" or framework of the issue.

A skill of debating had some bad time lately. First politicians corrupted it and turned it into screaming matches designed to offend the opponent. Secondly, in business, we are dropping a debate in favour of compromise and conformity. While using the power of an informed debate might drastically improve business results.

Let's review some of the reasons why modern businesses are no longer employing a debate as an effective tool for innovation.

A debate is a competition

And that makes many people uncomfortable. Yes, one can win or lose a debate, it's the best ideas, the best arguments and the best presentation that win. Or should win. Instead, what often happens is conformity being preferred to the competition. The thinking goes: one can lose a debate, losing sucks, so the loser would feel bad, we don't want people to feel bad so let's avoid debating at all. That's flawed thinking as there is no reason to feel bad about losing a debate. In an informed debate your ideas being challenged not you as a person. Hence it's not you who lose the debate - your arguments do. You can come back with a stronger case and win the next debate.

It seems obvious, right? However, I would argue that in a lot of modern businesses that's not happening. Best ideas don't always win because of the processes designed so, consciously or not. Inertia, politics, power games - every place is broken in its own unique way. However, the highly functional places, the winning places and groups, all follow roughly the same principals. Free flow of ideas and a process to debate those ideas to select the best ones.

Debate your way to a better product

Here are a couple of reasons why you shouldn't shy away from a debate in product management.

To present a strong case during a debate one should prepare well. That usually means synthesizing a lot of information, accumulating knowledge about a topic and expressing it in a concise and convincing way. Such preparations might only be beneficial to a product manager and all other people on the wider product team.

Making your content logically sound and emotionally appealing is a vital skill for any PM. A debate is a perfect place to practice your presentation. It might lead to a clearer understanding of your product, business and the market you're in.

It's hard to imagine an environment better suited to fast learning than informed debate. You'd have at least two opposing points of view, well-researched and elaborately presented. Depending on your particular situation - a debate might be a highly effective learning tool for the entire organisation.

Debating is fun on many levels. It's a competition, a challenge, so all participants need to raise their game and get better. A debate is a wonderful opportunity to hear people who are not normally involved in an ideation process. Imagine hosting an open debate where anyone from within your company might show up and make their case. Only those who care will bother to participate in a debate so it might show companies whether they have mercenaries or visionaries on their teams.

Product management is not an exact science. Instead, good product teams employ any methods that could help them succeed. The debate is such a method. Done right it could improve the quality of decisions, spread knowledge across the company and help product people to become better. Don't agree? Debate away!