Why all products are similar? 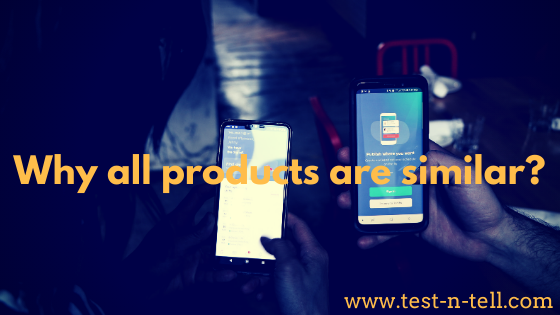 Have you ever wonder why most of the products look quite similar? All mobile phones are just plastic/glass/metal rectangles with a screen on top. All keyboards, however shiny, are qwerty-based. Or even Windows and macOS, despite cosmetic differences, are similar in core design principals. How come everything is so similar?

Dominant design theory
A dominant design is the one that wins the allegiance of the marketplace, the one to which competitors and innovators must adhere if they hope to command significant market following.

Why does it matter?

What to do before the dominant design is established?

That's the time to innovate. You have all the chances to be the first to the market if you'll solve an urgent and pervasive problem. Later, if enough people use your product - it can establish the dominant design. Unfortunately, it doesn't automatically mean you'll stay top forever.

When the dominant design is about to emerge...

You can still board that train if you have a developed execution capacity. HBR calls it "the fast second" strategy. You don't need to be an innovator to win in a certain market category. All you need is to catch the right moment when the dominant design is about to be established. And then you produce a product that is cheaper and more available to a bigger number of customers. This way you can get a big chunk of the market without high risks of being an innovator.
iPhone is a good example here. Apple has established the dominant design but Android has a bigger market share now.

Could products be exciting only before the dominant design is established?

I remember the golden days of mobile development early 2010x. People used to queue before the stores, pre-order devices months in advance. Every OS release was exciting and brought so many cool features. Tech presentations were proper shows and glimpses into the future. XDA developers and the boards alike had thousands active hackers and enthusiasts. But it's all became dull in the last couple of years. Nowadays, I don't even know what version of Android my phone runs. Does Apple still use cat names for its OS versions? Our phones, more powerful than ever, became kinda the same. And perhaps that's because of the dominant design has been reached. Innovations are no longer promoted, now it's all about optimisation. Three cameras instead of two, slightly bigger screen, a bit more battery life and so on. The mobile market segment became huge very quickly. Now when the dominant design is established it's consolidating. But maybe somewhere there is already a few guys in a garage trying to create a radically new way to communicate and serve the Internet. Those guys have chances, however tiny, to innovate and create a new market segment.